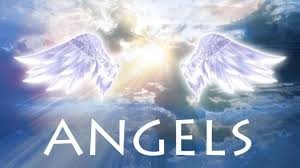 Have you ever entertained an Angel unaware?

Did you maybe meet one or see one and did not even realize it until later?

Have you ever spoke to one who asked for help, and did not know it?

The Bible speaks of angels over and over again!

One of my favorite scriptures is Hebrews 13:2…..

Be not forgetful to entertain strangers; for thereby some have entertained angels unawares.

I have heard so many different people speak of angels in my lifetime.  Here I am going to share with you about a couple of my own meetings with angels.

Many years ago, when my children were young we were headed to school and I decided to get them a biscuit from our little local Cafe, Caesars, which I have talked about in a different blog.

I pulled up and started in, and there at the window, sat this little old man.  I so vividly remember this, it has bothered me ever since that day.  He was an older person with such raggedy old clothes and barefoot.  I found it so strange!  I had never seen him before, and in our little community; you simply knew everybody.

He asked me if I could spare some change.  I brushed him off, actually, I glanced his way and just walked right on into the cafe.  I asked Mr. Bramlett who the man was standing at the window.  He said:  “Christine, there’s nobody out there, I just walked in and there was not a soul there.” and he proceeded out the door to see who it was.

And was there anybody there?   Nope, there sure wasn’t.  We both were puzzled by it, discussed it a minute and I went on about my day of taking the children to school.

I asked the kids about the man standing there, and they both said:  ” We didn’t see anybody Momma, there was nobody there.”

Even now, I know that I know, that I entertained an angel unaware.  Which is wonderful in and of itself.  But still, to this day I still regret the fact that I just dismissed him and his plea for spare change!

I have always felt that I failed a very important test of helping others, even after thirty plus years, it is still just as real as it was then!

Ever since that time, I purposely watch out for strangers and people that may be in need.  I never want to fail that test again!

And of course, you can find people in need everywhere nowadays.  Even standing at the traffic lights, outside stores, on the side of the road, almost anywhere.

Do I help them all?  NO, I don’t.  Why?  Because I go by my feelings inside.  If I don’t feel a peace about it I simply pass on by.  Yes, some of you may be thinking… “Well, you’re not really trying to help others unaware.”  Not true, but in today’s world so many people pretend to need help, that really truly do not, or maybe even mean you harm.

So I simply pray beforehand.  If God gives me peace about helping them I do, but if I feel uneasy, I simply pass on by.  I truly believe God gives you discernment if you will only take the time to ask Him and be still and listen for His answer.  Is it audible?  Well for me, no but you sense his nudging in your spirit. You simply have to trust and listen.

My daughter reminded me of the next story.  I had forgotten about it; maybe because of the outcome.  You just got to know my daughter, she is one of my very best friends after God.  But that’s a story for another day.

And what to our amazement ….. she too was no longer there.  She simply vanished cart and all.  No, she did not have time to cross the bridge, it wasn’t exactly little, nobody picked her up, there wasn’t enough time.  But still, she was gone!

I like to think I passed that test, to help an angel unaware.  I was concerned, I did turn around to go help her.  I like to think God simply placed that angel there just for us, to see how I would react, and I feel I did as He hoped I would, that time.

Recently, well probably a year or more now, time has a way of slipping by way too fast (that’s another topic for some other day also).

But anyway, I was headed to work one morning, and just as I was about to get on the bypass, there was this little lady walking.  She had nothing with her but her purse, and I felt so strongly to stop and help her.

So, I pulled over real fast, rolled down the window, and asked her could I give her a ride.  I remember there was so much traffic, it was early morning commute time; so you can imagine.  But I simply stopped anyway.

She said, “Yes dear, I appreciate it.”  She climbed in and I asked her where I could take her to.  To this day, I still can’t explain it, but she just wanted to go up the hill, so that’s what we did. We drove maybe 1500 feet, and I let her out where she asked me to.

You’re probably thinking well, she just did not want to walk up the hill.  Not true!

Do you want to know why?

Because I let her out, crossed over the road, made a u-turn, looked back and she was gone.  Just simply gone, vanished just like all the other times.  I knew right then I had once again entertained an angel unaware!

So, my dear readers and friends, as you go about your daily lives, please remember that you just might be talking to a stranger; but you just maybe are talking to one of God’s precious angels, sent just for you!

So be on the lookout, help others when you feel led to… for you also may just be entertaining an angel unaware!